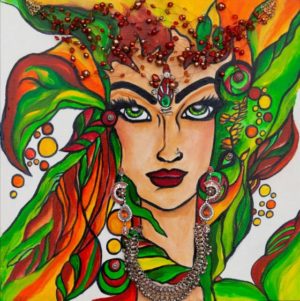 Bhavni is a Winnipeg based multi-media artist. She mainly works with acrylics on canvas. The subject matter usually reflects her East Indian heritage. Bhavni is also a filmmaker which inspired her to delve in photography. Bhavni is a grandmother of two and shares her time between Winnipeg and her lake home in Hnausa (a small community in the Interlake). This is her fourth solo exhibition at Cre8ery.

However while recovering from surgery and unable to paint, I was inspired by the beauty of northern Manitoba nature and landscapes. Awed by what I call ‘God’s palette and art’, I took many photographs that propelled me in including them in this show.

I wanted to honour not just my culture but the adornment of Mother nature’s incredible display of colours, light and composition over the four seasons.

Eventually when I started painting the series, I realized that each face was reminiscent of certain women in my life and have labelled them with their actual names.

The jewelry used in each painting is my own I’ve worn over previous years. Furthermore, I’ve been influenced by the ‘Madhubani’ style of village folk art from India.

The specific style calls for patterns, nature, and certain creatures symbolic in my culture, like the peacock, outlining most elements with a black line and framing them in ostentatious fabric used in East Indian clothing.