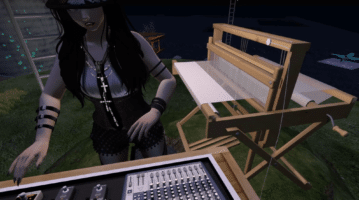 Having spent time in and out of virtual worlds for over 20 years, this past year of relative isolation led me back in. Through this period I have realized the incredible potential for art making within user generated avatar based virtual worlds. I have been performing live sound with an exact replica of my loom built by a friend who I met in world. I’ve also been DJing, building immersive installations and filming short films as part of a genre of filmmaking called Machinima.

Many philosophical questions have presented themselves during 2020-21 as I have ventured into the culture of a virtual world. Through my research I believe that it will not be long that virtual worlds are widely accepted and that the ways in which people engage with art will be influenced by an immersive user generated metaverse. In this introductory hands in workshop delivered inside the virtual world, I will show people the tools available to them in Second life which can be used for making machinima, creating visual and sound installations and the basics to performing live sound in world.

About the instructor:
Kelly Ruth is a Textile/New Media artist from Treaty 1, Winnipeg, currently living in Treaty 6, Edmonton. She has been activating her textiles and tools through using electronics, sound, and integrating microcontrollers into the foundations of her woven cloth. She has created several bodies of work using fibre, dyeing with plants, and weaving, recognizing these as early technologies, and a relationship that humans have had with the land. Most recently she has been researching, creating, and performing in the virtual world. In her work she is primarily concerned with the interplay between class, economics and ecology. In performance she uses contact microphones and effects pedals on her weaving loom and other fibre related tools. She performs solo and with an improvisational trio named Civvie. She has performed solo at the Vancouver New Music Festival, Handmade Assembly, Forthwith Festival and has exhibited a textile/sound installation as part of Send + Receive Festival, as well as participated in a residency at the Textile Arts Centre in Iceland and performed at KM28 in Berlin. Working with Civvie she has performed at Sounds Like Festival, Now Hear This Festival in a collaboration with Ethan Bokma and respectfulchild, Jazz Winnipeg Festival, and has opened for an improvisational collaboration between Venetian Snares and Daniel Lanois.