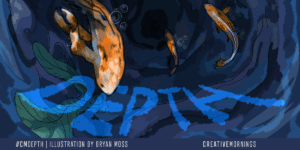 A SPECIAL DOUBLE FEATURE THIS SEPTEMBER
World Wide Wander through the Exchange District • 7:15 am  + CreativeMornings Winnipeg featuring Liem Nguyen • 8:15 am

Depth is a measure of distance. Get a feel for it by travelling along a rock fissure that tunnels into the earth, stepping across the expanse between our galaxy and the next, or diving into the mysteries hidden within ourselves.

When you watch a Pixar animated movie, it’s easy to get attached to the characters, right? Creative depth is a valuable quality to have as an animator. Animating is not just about making things move. It’s bringing a character to life. Before my pencil even touches paper, I take some time to analyze my subject. Being aware of the facts and information about the scene is good… but go deeper! I act out in front of a mirror, study reference shots, re-watch movies and TV shows, and immerse myself in the story. I try to find purpose for every move, every pose and every facial expression. This applies to the world beyond animation. You may notice things that are overlooked by others. You may find joy in mundane tasks. Over time, this in-depth approach will teach you to see the world differently.

Liem is an Emmy award-winning 3D artist from Winnipeg. With over 2 decades in the film and video game industry, his credits include The Italian Job, The Core, Matrix Reloaded, Need For Speed and Tom Clancy’s Ghost Recon to name a few. Liem graduated from the world-renowned animation program at Sheridan College in Ontario. He was trained by industry professionals who have worked for Warner Bros, Disney and Pixar. He prides himself on pushing the envelope on every single project he is a part of.