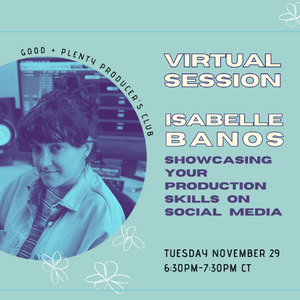 Join us as we learn from producer and artist Isabelle Banos about how to get the right technical setup, the right editing tools, and the best sound for high-quality videos intended for showcasing your production skills on YouTube, Tik Tok or Instagram Reels.

As an engaging content creator on all of these social platforms, Isabelle Banos has a wealth of knowledge and experience to help you make better videos in less time!

This session is open to everyone in our wider producer community of any gender identity. Register for free and receive the Zoom link!

Register via Eventbrite to get the Zoom link
Facebook Event Page

Isabelle Banos is a Montreal-based producer, songwriter and founding member of the alternative pop band Caveboy, in which she plays bass and synthesizers. She has performed across Canada, showcased throughout the U.S. and participated in major music conferences all over the world. While she loves producing music in many genres, she most enjoys working on genre-bending pop music that blends together her various influences from previous decades.

Her music has appeared in TV shows, and movies, most notably Caveboy’s “Color War” in Netflix’s Orange is the New Black. Her most recent project was re-imagining a holiday classic for the popular film Happiest Season (Hulu). In 2020, Music Publishers Canada named her among the Top 8 emerging female producers in Canada to be welcomed into the “Women in the Studio” accelerator program. She has written columns for Canadian Musician magazine and was featured in their 2018 “Queens of the Low Frequencies” article, in which she was highlighted as one of the leading female bass players in Canada.

Isabelle is a contributor and online personality for LANDR’s YouTube Channel, as well as a board member and regular volunteer for the Montreal chapter of Rock Camp For Girls, Trans, Non-Binary, and Gender Non-Conforming Youth. In April 2021, she opened her own commercial studio, “Chez Ballsy,”; a space created by and for women and gender minorities.