Created in partnership with Arts AccessAbility Network of Manitoba

After 30 years of denying he had the mental illnesses that were controlling his life, Big Daddy Tazz realized that being manic-depressive, attention deficit, socially anxious and dyslexic could either destroy or enhance his life… it was his choice. Join Tazz as he takes a seriously humorous look at accessibility for those living with mental illness and invisible challenges.  Tazz openly shares his mental health story with you, and will help you brainstorm and discover parallels in the solutions that have worked for him.  This two hour workshop/roller coaster ride will leave you with some practical advice and ideas, and the knowledge that you are not alone in your journey.  They say we are all in the same boat, although some of us can’t get to it because of accessibility issues.

Other Workshops in this Series: 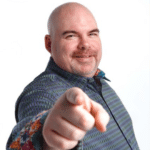 After 30 years of denying he had the mental illnesses that were controlling his life, Big Daddy Tazz realized that being manic-depressive, attention deficit, and having mild dyslexia could either destroy or enhance his life… it was his choice.

Today, audiences are happy to join him on his rapid cycle ride down the never-ending road to recovery that has led him from comedy venues across North America to the Psych ward at the Calgary Foothills Hospital (held over).

Often described as “one of the most talented comics in the business,” Big Daddy Tazz has been delighting crowds at fundraisers, corporate events, festivals and on television for more than twenty years. Known as the “Bi-Polar Buddha”, Big Daddy Tazz is equal parts comedian, and motivational speaker who likes to enlighten, educate and inspire. As a result, his one-man shows have drawn rave reviews and standing-ovations from coast-to-coast.

His appearances have included the prestigious Just For Laughs festival in Montreal, the Moncton Comedy Festival and the CBC Winnipeg Comedy Festival, for which he annually multi-tasks as a writer, producer and performer. His Gala performances at the Winnipeg Comedy Festival over the years can be seen frequently on CBC television and the Comedy Network.  In 2008 he broke the world record for the longest continuous stand up comedy show at 8 ½ hours.

Big Daddy Tazz tours the country speaking on Good Mental Health, Bullying and Customer Service.  For the last 14 years Big Daddy Tazz has brought forth light and laughter for those living with mental Illness, by raising awareness that stigma effects all of us. With his newest endeavour “Stand Up Against Stigma” Tazz believes that it is time to educate, embrace, and empower everyone so that we can all stand tall and give stigma a bad name!

Whether it’s a corporate event or charity fundraiser, comedy show or mental health keynote seminar, Tazz will make you laugh until you cry and then laugh some more, it’s the bi-polar way.

Image Description: This is a head shot of Big Daddy Tazz. Tazz is a bald, white man in his 50s. He is smiling and pointing at the viewer. Tazz is wearing a colourful shirt with green, blue and black dashes. The colour and cuff of his shirt is colourful. 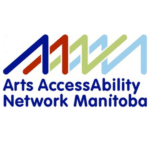 Arts AccessAbility Network Manitoba is a regional not-for-profit artist run charitable organization dedicated to the full inclusion of artists and audiences with disabilities into all facets of the arts community.