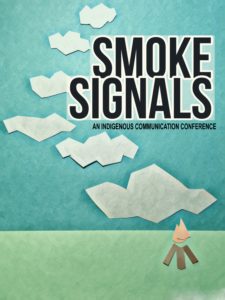 The smoke signal is one of the oldest forms of long-distance communication used to gather people together for celebration, to transmit news, and to signal danger.

Hosted by Creative Manitoba Indigenous Programs, Smoke Signals is a gathering of community-engaged artists and arts leaders examining the importance of Indigenous voices in art and media. By reclaiming our roles as oral historians, we find our power through speaking out.

Our goal is to gather around the foundation of our traditional cultural teachings, transmit our Indigenous world view through the power of art and signal the dangers of cultural appropriation. We will spend the day exploring the power of words and intentions in the art world as storytellers and as Indigenous peoples.

All welcome: The Smoke Signals gathering is for both Indigenous and non-Indigenous artists, students and creatives working in the non-profit service provider sector and in commercial art galleries:

During the day we will:

Adeline Bird is an Afro-Indigenous podcast host/producer and author from Winnipeg, Manitoba. Her passion and drive for storytelling and inspiring people to live more consciously gave birth to her podcast “Soul Unexpected”. Her talent as a host has led her to hosting festivals such as “Spur Fest” and “Winnipeg Pride 2017”. She’s also featured in Huffington Post’s “Like A Tourist” and was recently in the running for CBC Manitoba’s Future Leaders of Tomorrow Award. Adeline can be heard hosting the weekly Indigenous Top 40’s Countdown on NCI and Sirius XM Radio. 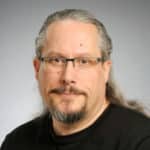 David Garneau is a descendent of Métis activist and homesteader Laurent Garneau, who used to own part of the land where North Campus now sits. Born and raised in Edmonton, Garneau received a BFA in painting and drawing and an MA in English literature from the University of Calgary. He taught at the Alberta College of Art and Design (1994-99) and is now associate professor of visual arts at the University of Regina. Garneau is interested in creative expressions of contemporary Indigenous identities and moments of productive friction between nature and culture, materialism and metaphysics. 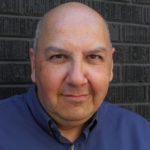 Elder Albert McLeod is a Status Indian with ancestry from Nisichawayasihk Cree Nation and the Metis community of Norway House in northern Manitoba. He has over twenty years of experience as a human rights activist and is one of the directors of the Two-Spirited People of Manitoba. Albert has managed youth programs at Ka Ni Kanichihk and more recently at the Youth Peacebuilding Project at Menno Simons College. To honour his wide-ranging contributions over the past 30 years to Two Spirit people and Indigenous people living with HIV/AIDS, as well as for his community-based advocacy and dedication to human rights for all genders, The University of Winnipeg proudly presented Albert McLeod with an Honorary Doctor of Laws in spring 2018. 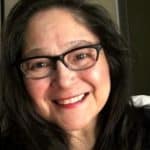 Lita Fontaine is an interdisciplinary artist and author based in Wpg MB. Often, her work explores the role of women in past and present Indigenous societies. She describes herself as tri-cultural: Dakota, Anishinaabe and Metis. She received her BFA from the University of Manitoba School of Art in 2000 and her MFA from what is now the First Nations University of Canada in Regina in 2005. Fontaine currently works at the Seven Oaks School Division as Artist in Residence. Her current role as Artist in Residence is to collaborate with teachers, integrating art into the school division’s curricula. Fontaine’s practice is predominately studio based and her methodology in the area of arts education is hands-on, where creative processes play an integral role in learning. Fontaine believes the visual arts act as a catharsis that nourishes emotional, physical, mental, and spiritual growth. 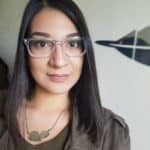 Sadie-Phoenix Lavoie is an Anishinaabe Two-Spirit from Sagkeeng First Nation, graduating with a BA in Indigenous Studies and Political Science. Sadie-Phoenix formerly was the Co-President for the UW Aboriginal Student Council; Aboriginal Student Commissioner for the Canadian Federation of Students MB; and Vice-President of External Affairs on the University of Winnipeg Students’ Association. Sadie-Phoenix is currently the National Executive Representative of the Circle of First Nations, Métis and Inuit Students. Sadie-Phoenix has worked on numerous on student led initiatives including the Indigenous Course Requirement and the Fossil Fuel Divestment Campaign. Sadie-Phoenix is one of the co-founders of the Winnipeg based, Red Rising Magazine, which gives Indigenous youth a platform to share their perspectives and experiences to a broad audience without censorship. Sadie-Phoenix attended the UN COP22 in Marrakech, Morocco on behalf of the Canadian Climate Youth Coalition. They were also one of the 100 youth arrested on Parliament Hill protesting the Kinder Morgan Pipeline, and has been on the front line of Standing Rock. Sadie-Phoenix has participated and organized numerous community events, rallies, marches and speeches around Indigenous rights, challenging racism and colonialism, Indigenous climate justice and youth empowerment. Sadie-Phoenix is able to do all this work with the spiritual guidance of Elders, Traditional Knowledge Keepers, and consistently going to ceremonies with other youth leaders. 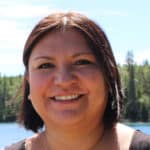 Daina Warren is a member of the Montana or Akamihk Cree Nation in Maskwacis (Bear Hills), Alberta. In 2000, she was awarded Canada Council’s Assistance to Aboriginal Curators for Residencies in the Visual Arts program to work with grunt gallery in Vancouver. This opportunity led to a permanent position with the artist-run center as an associate curator and administrator until 2009. Warren completed the Canada Council’s Aboriginal Curatorial Residency at the National Gallery of Canada in Ottawa, Ontario, where she curated the group exhibition Don’t Stop Me Now. She has received her Bachelor’s degree in 2003, graduating from the Emily Carr University of Art and Design. Warren graduated from a Masters in Art History program, completing the Critical and Curatorial Studies from the University of British Columbia (2012). Most recently, she was awarded the 2015 Emily Award from Emily Carr University and selected as one of four Indigenous women curators as part of 2015 Asia-Pacific Visual Arts Delegation to participate in the First Nations Curators Exchange an International Visitors Program of the 8th Asia-Pacific Trienniale (APT8) in Brisbane, Australia. She is currently the Director of Urban Shaman Contemporary Aboriginal Art in Winnipeg, Manitoba. 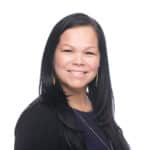 Jessica Dumas is an Indigenous Professional Lifestyle Coach, Speaker, Influencer and President of ‘Jessica Dumas Coaching & Training’. Jessica has experience in executive coaching, group facilitation and training, conflict resolution and mediation, social media marketing, customer service training, program development and management, professional speaking – and community leadership. Jessica was recognized as a Finalist in the CBC’s ‘Top 40 Manitoban’s under 40’ for 2015 and the ‘2017 Future Leaders of Manitoba’. Jessica has served as Chair of the Aboriginal Chamber of Commerce, is an Executive Member of the Winnipeg Mayor’s Indigenous Advisory Circle and is the incoming Chairperson for the Winnipeg Chamber of Commerce. 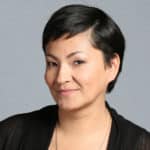 Rosanna Deerchild has been storytelling for more than 20 years, most recently as host of CBC Radio One’s Unreserved, a show that shares the stories, music and culture of Indigenous Canada. Rosanna is a veteran broadcaster, having worked at APTN, CBC, Global and NCI-FM, where she hosted All My Relations. She has also hosted The (204) and the Weekend Morning Show on CBC Radio One and appeared on CBC Radio’s DNTO. She is an award-winning author and poet. Her debut poetry collection ‘this is a small northern town’ shares her reflections of growing up in a racially divided place. It won the 2009 Aqua Books Lansdowne Prize for Poetry. Her second book, ‘calling down the sky,’ is her mother’s Residential School survivor story. Rosanna is a co-founder and member of the Indigenous Writers Collective of Manitoba and has also contributed to numerous Indigenous newspapers. A Cree from O-Pipon-Na-Piwan Cree Nation at South Indian Lake in northern Manitoba, Rosanna now lives and works in her found home of North End, Winnipeg.